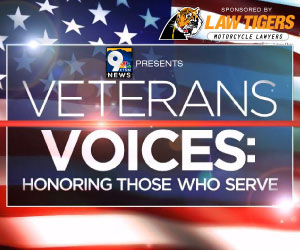 EL PASO, Texas (KTSM) – Disabled veteran Chris Lloyd and his service dog Daisy will soon have the keys to their very first home.

Chris served in the military for nine years, completing two tours in Afghanistan, leaving him with PTSD.

Since getting out he has made El Paso his home. However, currently, Chris and Daisy are living in a 300 square foot apartment while he goes to school full time.

The new house is three bedrooms, two baths with a big bag yard that Daisy can play in.

“I can do whatever I want there, I can landscape it, put some trees. Maybe to some people that doesn’t mean a lot but to me that’s awesome. It’s mine so that means a lot,” said Lloyd.

The house is being built by Habitat for Humanity. A nonprofit organization that helps people in need own a home. The Habitat homeowners must help build their homes alongside volunteers and will pay an affordable mortgage. However, Chris’s house was mostly paid for by donations.

Habitat says they have had huge community support with volunteers working on the house and people donating.

“We had all different groups from Fort Bliss who came out to help. I think part of it was that Chris is a vet and he’s a disabled vet and they wanted to support him,” said Dave Driscoll the Executive Director of Habitat for Humanity El Paso. “But it wasn’t just the veteran community, we had a roofer who came out here for free and put the roof on.”

Despite Chris’s disabilities he and Daisy have been out every weekend working on the house.

“I’ve been working on this house, there are some things I can’t do like the electrical work. But a lot of the small stuff we were putting in fiberglass, putting up the drywall, painting, picking up the trash, little odds and ends,” said Lloyd.

Due to all of the volunteers, Habitat says it’s the fastest they have ever built a house in El Paso. Once finished it will have been completed in about three months.

Allowing Chris and Daisy to get the keys the first week of December just in time for Christmas.

State of Texas: The Reckoning Begins

State of Texas: Missing in Texas

UPDATE: UMC’s open registration for first doses of COVID-19 fills up in minutes

Majority of U.S. Catholics say abortion should be legal in most cases, survey shows